Hopefully spring is just about to begin and the weather will improve. Let’s hope this summer allows us to enjoy our cars to the full – or at least warm the garages/workshops up! Herewith a past picture of D0311 in Denmark in 2014 enjoying the scenery. This was taken fairly early in the morning but the sun soon broke through for the rest of that day.

A phenomenal response (well for Dispatch anyway!) to my question on tyres as to how good or otherwise were the Blockley as opposed to the old Dunlop Forts (now ‘Exselsior’ brand and made in India using the original Dunlop moulds.) especially in the wet. It was a bit like the Brexit question – you were either all for them or totally against! To be fair the vast majority were in favour of the Blockley and Barry Foster even sent in this picture of him dicing with Dave Cooksey, both in C Types, in very wet conditions, both on Blockleys!

I picked up a price list from the Blockley stand at the Stoneleigh MG/Triumph show on the 9th February and I must say am very impressed with the range they do now. The D uses 400 X 19 and these are listed at £74.00 each plus VAT making a total of £88.80.

Speaking of the Stoneleigh show I don’t think I’ve met so many people before that I knew although only 3 or 4 D owners were there. The Triple M Register had a very good stand and seemed constantly busy especially at midday when the traditional gathering takes place – many from the continent.

Herewith a picture, on a few facebook sites, of the Triple M Register stand taken fairly early on before the crowds descended. The availability of Triple M parts and stalls selling them seems to grow each year now whereas only a few years ago it seemed to be going the other way.
The next major event of interest to D owners is the MG Era Day at Brooklands in Surrey on April 19th. For the clash of dates for Pre-War Prescott and Silverstone Live on 13th/14th June at the moment the D Group plans to have its marquee up in its usual place at Prescott on the Saturday and I intend going to Silverstone on the Sunday. 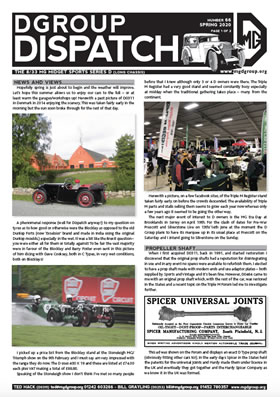 When I first acquired D0311, back in 1991, and started restoration I discovered that the original prop shafts had a reputation for disintegrating in use and in any event no spares were available to refurbish them. I elected to have a prop shaft made with modern ends and use adaptor plates – both supplied by Sports and Vintage and it’s been fine. However, D0464 came to me with an original prop shaft which, with the rest of the car, was restored in the States and a recent topic on the Triple M Forum led me to investigate further.

This ad was shown on the Forum and displays an exact D Type prop shaft (obviously fitting other cars to!). In the early days Spicer in the States held the patents for the universal joints and Hardy made them under licence in the UK and eventually they got together and the Hardy Spicer Company as we know it in the UK was formed.

The D Type ‘List of Spare Parts’ booklet produced by the factory just lists ‘Propeller Shaft (Hardy Spicer)’ in two sizes – presumably in length catering for the chassis after D0350 which were 2” longer.

The D Type ‘List of Spare Parts’ booklet produced by the factory just lists ‘Propeller Shaft (Hardy Spicer)’ in two sizes – presumably in length catering for the chassis after D0350 which were 2” longer.

However, some other makes using the same prop shaft produced much more useful publications and the ‘Austin Seven Spare Parts list’ in particular gives a breakdown of the parts incorporated in the universal joint and a very useful exploded view of the joint end reproduced below:

I wish I’d known about this back in the 90’s! – does anyone know if any spares are now available for these early prop shafts either here or in the States?

footrest on a d type? 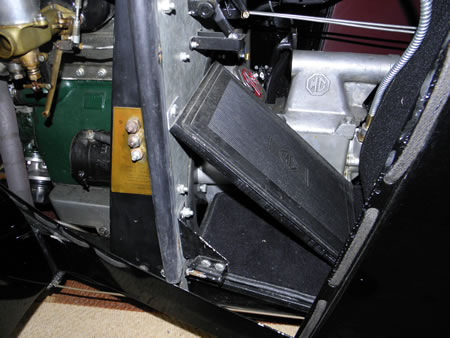 I was asked the question recently as to whether the D had a passenger footrest fitted when new. Whilst this may have been Standard fitting on some models it is not listed in the spare parts booklet for the D, nor is it on the list of factory extras available for the D.

However, some people have fitted them and indeed D0464 came with one. They can be quite simple affairs and very easily fitted or taken out when the need arises.

All are based on the rubber, MG embossed heel mat available from the usual sources which measures approximately 8” x 12”.

Pictured is the installation in D0464; a simple piece of ½” plywood and one simple bracket which utilises one of the fire wall bracket support bolt holes rather than drilling any new ones.

Any further fixings on the other side or even to the floorboard would make it more rigid but is not strictly necessary.

In the last Triple M Register Bulletin there was a piece from Philip Bayne-Powell about new condensors from The Distributor Doctor – famous for his red rotor arms, be very wary of imitations now being made also in red but no where near as good. We’ve all had trouble with condensors failing and these new ones should be very much more reliable having been made to his own specifications.

Has anyone a spare D/J1/F1 hood frame surplus to requirements? Let me know if you have – and indeed any other spares suitable for a D you know longer require.